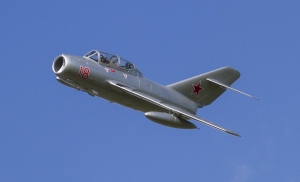 For the first time since the late 1990s the MiG-15, a Cold War classic jet fighter belonging to the Norwegian Air Force Historical Squadron, will be displaying in the UK and will be thrilling visitors to Dunsfold Wings & Wheels on Saturday 29th and Sunday 30th August.
The Mikoyan-Gurevich, MiG-15, was one of the first successful swept-wing jet fighters, and achieved fame in the skies over Korea, where, early in the war, it outclassed all straight-winged enemy fighters in most applications.

The MiG-15 is believed to have been one of the most widely produced jet aircraft ever made. In excess of 12,000 were manufactured and licensed foreign production may have raised the production total to over 18,000. Some among them were Polish-built variants of which the Norwegian Air Force Historical Squadron's example is one. The MiG-15 is often mentioned, along with the North American F-86 Sabre, as the best fighter aircraft of the Korean War, and among the best fighter aircraft of all time. The MiG-15 remains in service with the North Korean Air Force as an advanced trainer.

The MiG-15 which will be displaying at Wings & Wheels wears the markings of the aircraft flown by famed Soviet cosmonaut Yuri Gagarin before he became the first man to visit outer space in 1961.

Jamie McAllister, Event Director comments: "The sight of the MiG in the UK skies is a rare one so we are thrilled to be able to bring this display to our visitors at Wing & Wheels. We have a host of fast jets at the Show and equally fast supercars on the ground. 2015 is definitely shaping up to be our most spectacular show yet."
Tweet
Published in News
back to top
Menu