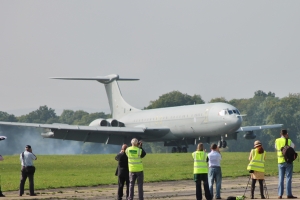 For the first time since its retirement from RAF service in 2013, Brooklands' Vickers VC10 airborne tanker will make a live public appearance with a full-bore-acceleration taxying demonstration on Sunday 30th August at 9.30am.
Complementing the vast array of air traffic overhead, Brooklands Museum's own queen of the skies carries the RAF serial number ZA150. It was the very last VC10 of 54 built at Brooklands in the 1960s and was converted to an air-to-air refuelling tanker in 1984, several years after its airline service was completed.

Since it was retired from RAF service and acquired by the Museum in September 2013, this will be its first public display and be the closest most people will get to see a taxying aircraft of this size. Between its passes along the runway in front of an awe struck crowd, visitors will be able to learn more about its history and venture on board as it opens its doors for tours. An additional charge of £3 will be charged to go towards its upkeep and maintenance.
Tweet
Published in News
back to top
Menu