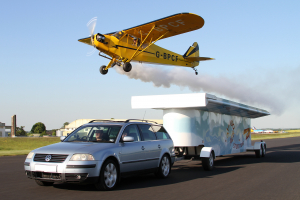 We are delighted to confirm that O’Brien’s Flying Circus has joined the five-hour air displays line-up at Wings & Wheels on Saturday 26th And Sunday 27th August. Brendan O’ Brien's and his team have created an awe-inspiring display which is a mix of barnstorming and innovation, combining the art of crazy flying with the precision required to land on the world’s smallest runway – a truck!
With over 13,000 flying hours, on over 300 types of aircraft, with a licence to fly every kind of aerial machine, internationally renowned aviator Brendan O’Brien will not only be in the display but will again resume his position in the commentary box in order to impart his aircraft knowledge to the crowds at this year’s Wings & Wheels.

Jamie McAllister, Event Director comments: “Brendan is not only superb in the commentary box, but his exciting display is a family favourite. A little bonkers and lots of fun we can’t wait to see if Brendan can land his plane on the truck!”

Brendan has developed several memorable and unusual firsts for the UK and European display circuit, including the Fournier Duo Aerial Ballet with Unipart and the famous Truck-top Landing act with Iveco Ford. It is the Truck-top landing act which Brendan will be performing at Wings & Wheels in the Piper J-3 Cub.

Brendan holds in excess of 200 world records for flying – more than any other individual pilot – all ratified by the FAI in Paris and entered in the Guinness Book of Records. He is also a qualified flying instructor on fixed wing aircraft, helicopters, Microlights and gliders, a CAA flight examiner, display authorisation evaluator, test pilot and medallist of the Royal Aero Club of the UK. He has flown on every continent in the world, including Antarctica.
Tweet
Published in News
back to top
Menu