On a knife edge with Richard Goodwin at Wings & Wheels 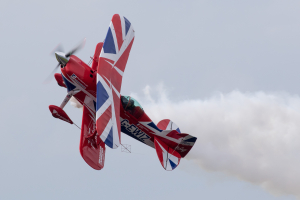 Richard Goodwin, a former military and commercial pilot, returns to Wings & Wheels on Saturday 26th and Sunday 27th August flying his specially modified Pitts S2S biplane, known as G-EWIZ, to wow fans with stunning aerobatic displays.
Using his experience and skills, Richard combines classic manoeuvres with high energy gyroscopic forces to produce a very dynamic routine that leaves the crowd gasping in wonder that he stays in the sky!

This year Richard has something rather special planned with a knife edge formation on the runway with a classic car – don’t miss it!

Jamie McAllister, Event Director comments: “This display literally takes your breath away. It’s fast, daring and exhilarating, and we are delighted to welcome Richard Goodwin and his remarkable display back to Wings & Wheels. It’s the only part of the display which also combines aviation and motoring and is a spectacle not to be missed.”

G-EWIZ is powered by a six cylinder, 8.5 litre engine producing over 300bhp and pulls forces of plus 6g and minus 5g at speeds of over 200mph. The Pitts S2S first flew in December 1977 and is a unique single-seat version of the classic Pitts Special aerobatic biplane powered by a fuel injected Lycoming engine. It is amazingly agile and capable of spectacular tumbles and a different style of high energy aerobatics. The plane’s unique paint scheme was designed and created by Mirco Pecorari at Aircraft Studio Design.
Tweet
Published in News
back to top
Menu