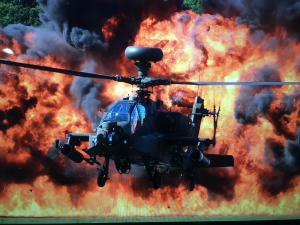 The thirteenth Wings & Wheels basked in glorious sunshine over the August Bank Holiday as crowds flocked to the annual air and motoring show at Dunsfold Aerodrome.
It wasn’t just the temperature that soared as visitors were treated to world class flying displays from the Red Arrows, Eurofighter Typhoon, Chinook and The Blades along with demonstrations from vintage and rare supercars on the Top Gear track and even a marriage proposal!

The Arena rocked to the sound of explosions and gunfire as the Apache Attack Helicopter Display team demonstrated its power and might, a dog fight demo from the two-seater Spitfire PV202 and Hispano Buchon (Messerschmitt) showed just how skilled pilots were in the Second World War and Brooklands Museum’s VC10 completed some ear-splitting engine runs alongside tanks that fired and rumbled in the Military Zone.

Welcome new additions to the airshow line-up included the Strikemaster, a pure turbo jet export version of the Jet Provost flown by Canadian pilot Mark Petrie, the quirky Gyrocopter flown expertly up close and personal to the crowd by Peter Davies and one of the most famous helicopters in the world and a genuine Vietnam veteran, the Bell UH-1 affectionately known as ‘Huey’.

The ‘Wings’ of the event was completed with a close-up inspection of many the weekend’s visiting aircraft including the Royal Navy Wildcat, two Hawk T2s, two Tucanos and an Apache where pilots were on hand to give tours of their impressive aircraft, in the static aircraft park.

Some rare supercars blasted down the runway in the Wheels Zone motoring demonstration including two Koenigseggs; an Agera N, only one of one made, and an Agera R which is no. 18 of 18, both hitting speeds up of to 194mph. Brooklands Museum orchestrated more displays from more than 150 cars in the motoring paddock including the Bentley 4.5 Ltr Le Mans, McLaren 570S, Lamborghini Diablo, Honda Civic Type R Black Edition, three American V8 NASCARS, a 1970 Grenade Dragster and Ferraris’ LaFerrari.

The Arena had lots to see and do with the free Sid’s Zone full of our littlest visitors colouring and playing all day and shopping was plentiful with over 80 retail outlets selling a wide variety of products, and a craft marquee full of craft gifts and tempting tea time treats and the *New* Vintage Market with delicious food, clothes and collectables.

As the last plane touched down Champagne at the Blitz ended the Show with some musical evening entertainment and dancing as the 1940s songbird trio belted out their smooth harmonies in seamed nylons and lots and LOTS of red lippy!

To top the weekend off Chiddingfold resident Hunor Gal surprised girlfriend Erika Lenart with a big romantic proposal in front of the crowds on Sunday (27th August). With help from the Wings & Wheels team and the Tigers Parachute Display Team, Hunor got his happy ending when Erika said yes!

Jamie McAllister, Event Director, Wings & Wheels comments: “It was a spectacular weekend with first class air displays, including a number of new displays not seen before, a host of rare and vintage cars in the Wheels Zone for the petrol heads, lots to see and do in the arena and even a marriage proposal! The success of the Show is down to all those who work so hard in the lead-up to and during the event along with our visitors who support the show so enthusiastically by joining us over the weekend. We had a great Show and are looking forward to doing it all again on 25th and 26th August 2018!”
Tweet
Published in News
back to top
Menu