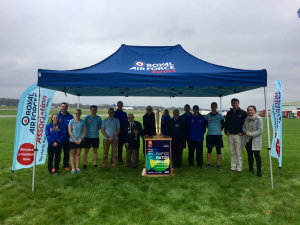 On 1 April, one hundred years since the formation of the Royal Air Force, a specially designed baton set off on a journey around the UK and abroad. Today (Tuesday 10th April) the Wings & Wheels team at Dunsfold Park were delighted to welcome the #RAFBatonRelay to the aerodrome.

After completing 26 miles to reach Dunsfold Park, the relay team took the opportunity to have some fun on the Top Gear Track before heading off to rest ahead of their 30-mile trek to Headley Court tomorrow.

Jamie McAllister, Wings & Wheels comments: “Dunsfold Aerodrome has played a significant part in the history of the RAF, with its role in the Second World War and then, later, through the development of aircraft such as the Harrier and Hawk. We were delighted to welcome the baton and relay team to the aerodrome and look forward to seeing them again when they display the baton at Wings & Wheels on 25th and 26th August 2018.”

The relay began its journey at the Royal Courts of Justice on 1st April 2018 and will end 100 days later on 10th July on Horseguards Parade.

The idea of the baton relay originally began as an orienteering challenge and still has a significant element of that in it. Each baton carrier is given a start and end point and they then have to work out the rest themselves.

The baton is being carried by RAF personnel, cadets, veterans and members of the many sporting associations that make up the RAF and, over 100 days, will visit 100 sites associated with the RAF.

Amongst many means of travel, it is being transported by boat along the River Thames by the RAF Rowing Club, carried by the RAF Falcons as they parachute from an aircraft, ridden on horseback and power kited along Benbecula.

The RAF 100 baton itself is made out of brass, oak and aluminium to symbolise aircraft construction through the years and was designed and manufactured by RAF apprentices. In the shape of the RAF roundel, rings of red, white and blue LED lights illuminate the baton, which also features the RAF badge.