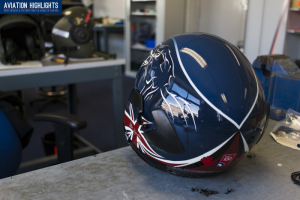 The familiar sound of the twin rotors of the Chinook will be back at Wings & Wheels on Saturday 25th and Sunday 26th August this bank holiday as the Chinook Display Team returns to Dunsfold Aerodrome with the much-loved helicopter.

The team is based at RAF Odiham in Hampshire and aims to demonstrate the RAF Chinook's capability. As well as part of the RAF Chinook Display Team, the crew are also part of a fully operational Squadron where they combine their daily training demands with practising their display sequence.

The Chinook Display crews have, for many years, flown with painted helmets but these have tended to be simple in nature and consisting of stripes of the British National or Squadron colours. For the RAF100 season, the team felt that the time was right for something new. The helmet was designed by team co-pilot Flt Lt Andy Donovan and incorporates the eagle from the Royal Air Force crest as its biggest feature.

The 2018 formation sequence consists of 17 different manoeuvres including, the opening Run in to Crowd Centre for Nose Over with Turn Away, Pedal Turn, 'Roller Coaster' (Nose Over followed by Nose Over), 360 degree Wingover at Crowd Centre, 180 degree Nose Down Quickstop, Taxi Sideways for Crewman Wave, 540 degree 'Gorni' Corkscrew, 315 degree Spiral Descent to break from Crowd

Before they finish with the Over the Shoulder Departure.

It’s a thrilling display which not only shows how skilful the pilots are, but the versatility and manoeuvrability of the Chinook helicopter used for trooping, resupply and battlefield Casualty Evacuation (CASEVAC) and for carrying internal and/or underslung loads.

Jamie McAllister, Event Director comments: “We love the Chinook at Dunsfold Aerodrome with its unique noise and watching the skill the pilots use to command the large helicopter. It is a display that has to be seen to be believed. We are thrilled to be welcoming the popular team back to Wings & Wheels for the whole weekend.”