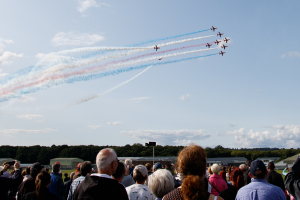 Wings & Wheels got off to a flying start as the sun shone and the crowds descended on Dunsfold Aerodrome on Saturday 25th August 2018.

The Military Zone crowd line parade kicked things off as the cavalcade of jeeps, tanks, trucks and motorbikes displayed its might, quickly followed by the fast and furious motoring demonstration from Brooklands Museum.

The Brooklands Museum VC10 roared to life as the team ran the engines and woke up the entire arena before the start of the air display.

O’Brien’s Flying Circus opened the airshow with its daring, comedy routine, much to the delight of the crowds. Quickly followed by new display the Fireflies with their two Van's RV4s performing

Visitor favourites the Chinook Display Team showed off its versatility and manoeuvrability as they took the twin rotor helicopter through 17 different manoeuvres and closed with their famous hand wave along the crowdline.

Richard Goodwin was next up in his Pitts S2S biplane with high energy gyroscopic forces to produce a very dynamic routine that had the crowd all holding their breath at his daring skill.

Peter Teichman then performed a special flypast in the Hurricane from the Biggin Hill Heritage Hangar to commemorate the achievements of Duncan Simpson and John Farley, both of whom were ex-chief test pilots for BAE Systems at Dunsfold and played important roles in the development of some of the world’s most iconic aircraft including the Harrier and Hawk. During the flypast, the poem High Flight by John Gillespie Magee, Jr. and read by Tom O'Bedlam, was played to the silent crowds.

The Tigers Parachute Display Team dropped into the arena. Once on the ground the team took their parachutes into the crowds and demonstrated how they were packed away.

Another new display this year was the Bronco Demo Team. A unique looking aircraft, the North American Rockwell OV-10 Bronco took off at a sharp angle to the gasps of the crowd before demonstrating how agile the turboprop light attack and observation aircraft can be.

The crowd never fails to fall silent as the Battle of Britain Memorial Team flew the Lancaster and two Spitfires in formation.

The Turbulent Team’s quirky balloon popping display caused much laughter before Sally B took to the skies.

The Vampire and MiG-15 from the Norwegian Air Force Historical Squadron roared across the arena before the MiG-15 was joined by the Sea Fury in an explosive simulated battle with explosions and fire balls that rocked the arena.

Headline display, the RAF Red Arrows, never fail to impress and the arena came to a standstill as the distinctive Hawk jets in their nine-aircraft formation flew into Wings & Wheels with their distinctive red, white and blue smoke. A fitting display for the Royal Air Force’s 100th anniversary year.

The straight wing Strikemaster jet was next up followed by The Blades who closed the airshow with their precision close-formation aerobatics in a dynamic and cutting-edge display.

As the event drew to a close, visitors continued to enjoy the 747, VC10 and DC3 tours, shopping, food and musical evening entertainment from Champagne at the Blitz who got the crowd dancing as they sang 40s, 50s and 60s classics.

As morning broke on Sunday 26th, the team had anticipated the bad weather forecast and announced changes to the event timetable the night before to ensure the crowds enjoyed the best displays and entertainment in the challenging wet and windy conditions.

The Great British Spirit was in evidence as word of the changes to an earlier timetable filtered through and visitors descended onto the aerodrome from 8.00.

The Military Zone parade and Motoring Demonstration kicked off the show once again followed by the Brooklands Museum VC10 firing its engines in a welcome morning roar. The Wheels Zone was full of hardy participants who rocked up to display their vehicles in the static display and the retail village and attractions opened for trade.

Opening the airshow, was Brendan O’Brien in the previously unscheduled Otto helicopter. Brendan danced along the crowd line, throwing Otto around in some daring manoeuvres with smoke and even fireworks! The rain certainly didn’t dampen his display.

The Fireflies were next up followed by the Bronco Demo Team. The Blades took to the skies and performed an outstanding aerobatic display before the Chinook took off and got the crowds doing a Mexican umbrella wave. The Strikemaster attempted their display but with deteriorating conditions the safety of the pilot was top priority and the full display was aborted after several flypasts. With high winds and heavy rain, the remaining displays took the decision to cancel as conditions were now dangerous.

Not deterred by the weather, the fantastic duo of Melvyn Hiscock and Brendan O’Brien, were at their best with spoof commentary to a ‘Stealth Aircraft’ display which included a ground shaking pyrotechnics finale. No photos were captured of the aircraft.

With the great British weather battering the arena visitors departed and, with no-one left, the decision to close the show was taken at 15:00.

Jamie McAllister, Event Director, Wings & Wheels comments: “Wings & Wheels was certainly an event of two halves! We were lucky enough to experience a glorious sunny day on Saturday and deliver a full programme of events that delighted the crowds. Sunday was certainly challenging and I am incredibly proud of the way the team adapted the show to ensure we were able to deliver as much as possible in a safe way to the fantastic crowd that braved the weather. Feedback has been exceptional and we truly appreciate the support that all our visitors show Wings & Wheels.”