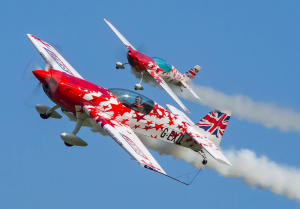 Wings & Wheels are delighted to welcome a new, unique display to the airshow, the G-Force Aerobatics Extra 300S flying with a 40% Scale Model.

The little and large display looks like two full size Extra 300 aircraft at first glance, on closer inspection the stunning routine of formation and opposition aerobatics is made up of a full size, high-performance, single-seat Extra 300S aircraft flown by Chris Burkett. The other aircraft is a 40% scale, radio-controlled model flown by Mike Williams.

The Extra 300 aircraft was designed by former world aerobatic championship competitor, Walter Extra, with a single aim in mind; to be the world’s top performing competition aerobatic aircraft. He succeeded. The German designed Extra 300 is the world’s most successful certified sport and performance aerobatic aircraft. It has proven its performance in international aerobatic competition, and in combination with its great handling and stability, it is the perfect cross-country touring aircraft. For pure power, handling and performance nothing can match the Extra.

The full size Extra came from the production line. The model extra came from Mike’s workshop. With a 3.1m wingspan, a length of 2.9m and weighing 18kg – this is no off-the-shelf model. Scale performance is similar in most areas to the full-size version apart from the power-to-weight ratio as you will see when Mike performs his helicoptering manoeuvre.

It’s a display that requires trust, ability, planning and plenty of practice.