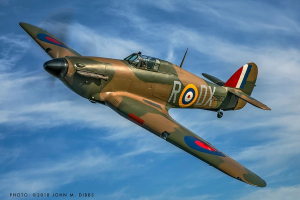 Wings & Wheels are very proud of the Aerodrome’s Hawker heritage and what better way to end the final airshow on Sunday 16th June but with one of the company’s iconic aircraft, the Hurricane.

On display both days is the Hurricane G-HITT Serial Number P3717 which originally started life as a MkI Hurricane and was later converted to a MkII. It was built in 1940 and originally fitted with a Merlin 3 engine. It was delivered to 253 Squadron at Kirton in Lindsey on 13th July 1940 and was flown by Pilot Officer WMC Samolinski. Seven weeks later it was attacked by a Messerschmitt BF110. During the Battle of Britain P3717 was allocated to B Flight with Pilot Office Samolinksi. It was involved in several dogfights between 253 Squadron and the aircraft of ZG2 and over Redhill, Surrey, Samolinksi claimed the destruction of a BF110. The aircraft eventually found its way to Russia, from where it was retrieved and returned to the UK.

The Hawker Hurricane is currently owned by the family of Hugh Taylor who sadly passed away in May. Hugh met his wife at Dunsfold Aerodrome and we couldn’t think of a more fitting aircraft to do the honours and close the final Wings & Wheels airshow on Sunday.

The Hawker Hurricane changed the course of history. Piloted by a few brave young men, including legends such as Gp Capt Douglas Bader DSO DFC and Wg Cdr Eric Nicolson VC DFC, it was the mainstay of RAF Fighter Command in the Battle of Britain, comprising two thirds of the force that fought the Luftwaffe in the summer of 1940. Although it has been overshadowed by the somewhat more glamorous Supermarine Spitfire, the Hurricane undoubtedly has greater historical significance.

Royal Navy test pilot Eric ‘Winkle’ Brown, who flew more aircraft types than anyone else in the world, said of the Hurricane that “it literally saved the country.” Indeed given the circumstances of 1940, when Britain stood alone against Hitler, one could legitimately claim that the Hurricane saved the world.

One reason for the Hurricane’s relatively low profile is perhaps the scarcity of airworthy examples. Of 14,583 originally built there are now only 15 flying in the world, of which 11 were restored by Hawker Restorations. Ironically for an aircraft known for its supposedly ‘old-fashioned’ construction – having wood and fabric elements that allowed it to absorb greater damage in service than the all-alloy monocoque of the Spitfire – the Hurricane is actually the more complex of the two. Exceedingly tight engineering tolerances, complex tube-squaring techniques and the use of relatively exotic materials requiring heat treatment and metallurgy mean that compared to a Spitfire, a Hurricane takes twice as much time and significantly greater engineering skill to restore. Hawker Restorations is the only company in the world undertaking this work to a standard approved by the Civil Aviation Authority (CAA).