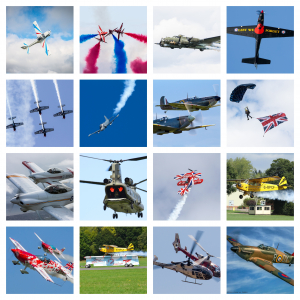 The final Wings & Wheels this Saturday 15th and Sunday 16th June is set to be our greatest show! The air display is known for its formations and the team have not disappointed this year. We are delighted to welcome, for our first formation, the ‘Ultimate Fighters’ comprising a Sea Fury and a Hurricane. Back from the 75th anniversary D-Day celebrations, the Aces High DC3 will be pairing up with the B-17 Flying Fortress, Sally B, for our second formation.

The Fury on display, construction number 37539, was produced by Hawker’s as a Fury ISS – Iraqi Single Seat for the Iraqi Air Force. Joining the Sea Fury is the Hawker Hurricane Mk.I G-ROBT - Serial Number P2902 – which was built in 1939.

The Aces High DC3 took part in D-Day 75 years ago and, if you look closely, you can still see the bullet holes in the airframe. The plane was amongst 30 other vintage Douglas DC-3 and C-47 Skytrains that soared across the English Channel in formation on 5th June for the 75th anniversary of D-Day celebrations. The DC3 will fly with the B-17 Flying Fortress G-BEDF, the last remaining airworthy B-17 in Europe. For 41 years Sally B has been maintained and flown as a memorial to the 79,000 Allied airmen who lost their lives in Europe during the Second World War.

Wings & Wheels is also delighted to welcome a new, unique display to the airshow, the G-Force Aerobatics Extra 300S flying with a 40% Scale Model. The little and large display looks like two full size Extra 300 aircraft at first glance, on closer inspection the stunning routine of formation and opposition aerobatics is made up of a full size, high-performance, single-seat Extra 300S aircraft flown by Chris Burkett. The other aircraft is a 40% scale, radio-controlled model flown by Mike Williams.

The Strikemaster duo has an explosive extra special surprise with pyrotechnics, adding to the pure turbo jet noise you won’t be able to miss!

Closing the last ever show on Sunday 16th June will be the Hawker Hurricane, a company and aircraft of special significance to the Aerodrome. This particular plane, Hurricane G-HITT Serial Number P3717, originally started life as a MkI Hurricane and was later converted to a MkII. It was built in 1940 and originally fitted with a Merlin 3 engine. It was delivered to 253 Squadron at Kirton in Lindsey on 13th July 1940 and was flown by Pilot Officer WMC Samolinski. Seven weeks later it was attacked by a Messerschmitt BF110. During the Battle of Britain P3717 was allocated to B Flight with Pilot Office Samolinksi. It was involved in several dogfights between 253 Squadron and the aircraft of ZG2 and over Redhill, Surrey, Samolinksi claimed the destruction of a BF110. The aircraft eventually found its way to Russia, from where it was retrieved and returned to the UK.

The Hawker Hurricane is currently owned by the family of Hugh Taylor who sadly passed away in May. Hugh met his wife at Dunsfold Aerodrome and we couldn’t think of a more fitting aircraft to do the honours and close the final Wings & Wheels airshow on Sunday.

Jamie McAllister, Event Director, Wings & Wheels comments: “The history of the site is incredibly important and we have been able to reflect that throughout the Show and, more poignantly, in the air. Over the years we have tried to add a little extra magic in the air with some memorable and unusual formation displays. We are thrilled to have such iconic aircraft, with close ties to the Aerodrome, displaying together this weekend.

In our final year it is bittersweet looking back and celebrating all that we have achieved, but the team also recognises it is time to say goodbye with one last hurrah. Over 14 shows Wings & Wheels has evolved and now has five hour air displays, two hour motoring demonstrations, an arena full of attractions and zones, theatre shows, military re-enactors, tanks and tours of iconic aircraft and so much more. It is something we are truly very proud of and are looking forward to celebrating.”